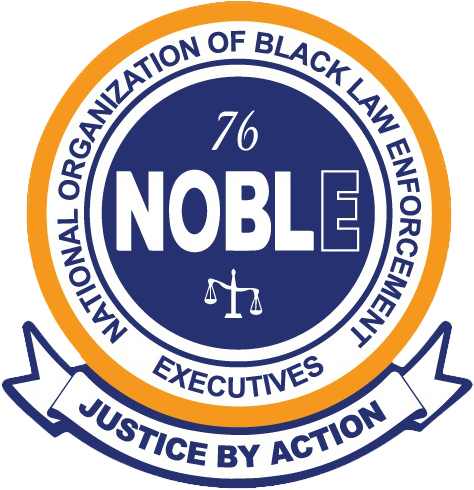 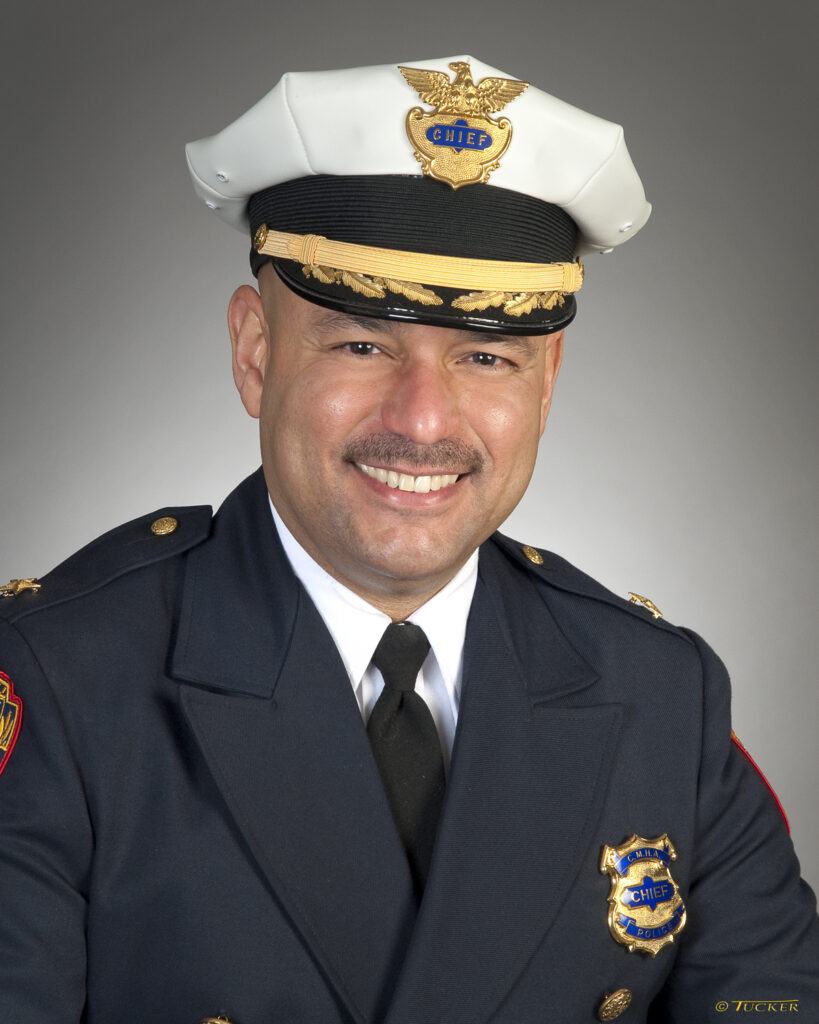 Chief Andrés González began his law enforcement career on June 1, 1981 with the City of Cleveland Division of Police. He was promoted to Sergeant in 1993 and served as Officer in Charge of various units throughout the Cleveland Division of Police. In 1999, González was appointed to the rank of Commander. He provided leadership to the Division’s Bureau of Communications and the Third Neighborhood District where he was successful in developing positive relationships with numerous city, county and private organizations.

In 2007, González was appointed Chief of Police for the Cuyahoga Metropolitan Housing Authority, a CALEA Accredited organization. He became the first Hispanic to be appointed Chief of Police of a political subdivision in Cuyahoga County. He immediately engaged with residents and members of the police department to improve the delivery of services throughout the county. He implemented a community policing mindset and created a positive impact to employee morale. González established several initiatives which have increased citizen confidence in the Police Department.

Chief González is the recipient of numerous awards and commendations including the prestigious Michael J. Kelly Award for Excellence and Innovation from the Ohio Association of Chiefs of Police. He is a graduate of the FBI National Academy, the Police Executive Leadership College and Leadership Cleveland Class of 2013. He is a graduate from the Cleveland State University with a degree in Urban Studies concentrating in Public Administration.

Chief González is a recognized Certified Law Enforcement Executive in the State of Ohio. He currently serves on the Boards of the Positive Education Program; the Partnership for a Safer Cleveland; the Ohio Executive Institute Committee and the Boys and Girls Club of Greater Cleveland. He also serves on a state-level as an Advisory Board Member on the Ohio Family Violence Prevention Center (Office of Criminal Justice) and the Ohio Council on Victims Justice (Ohio Department of Rehabilitation and Correction). 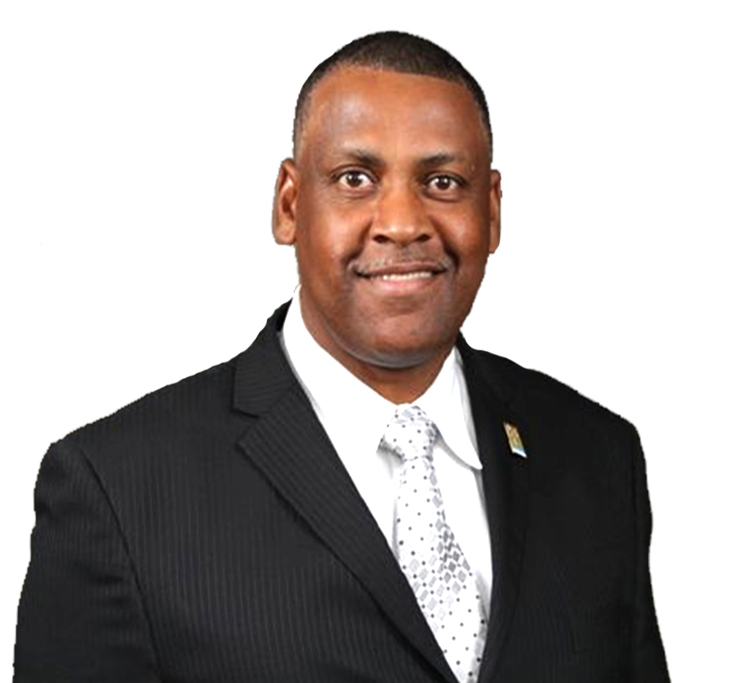 Clayton Harris is Chief of Police and Vice President of the Campus Police & Security Services Department at Cuyahoga Community College, the largest community college in the State of  Ohio. He is also an appointed member of the O.P.O.T.C., Ohio Peace Officer Training Commission. As Chief, Clayton Harris is responsible for the police department, central dispatch, advanced law enforcement training, the parking department and the overall safety and security of the college’s students, employees, and visitors. Clayton’s educational background includes an Associate’s Degree in Applied Science Law Enforcement from Cuyahoga Community College, a Bachelor of Science Degree in Law Enforcement and Criminal Justice from Ohio University and an Executive Masters of Business Administration from Baldwin Wallace College. Clayton is also a graduate of the United States Department of Justice National FBI Academy. His 30 plus years of law enforcement include leadership roles in numerous and diverse law enforcement associations including: Past President of the Cleveland chapter of N.O.B.L.E., Past President of Cuyahoga County Police Chiefs Association, the State of Ohio Amber Alert Steering Committee, State of Ohio Regional Coordinator for the Child Abduction Response Team and the City of Cleveland’s Diversity Task Force and Anti-Crime Commission. 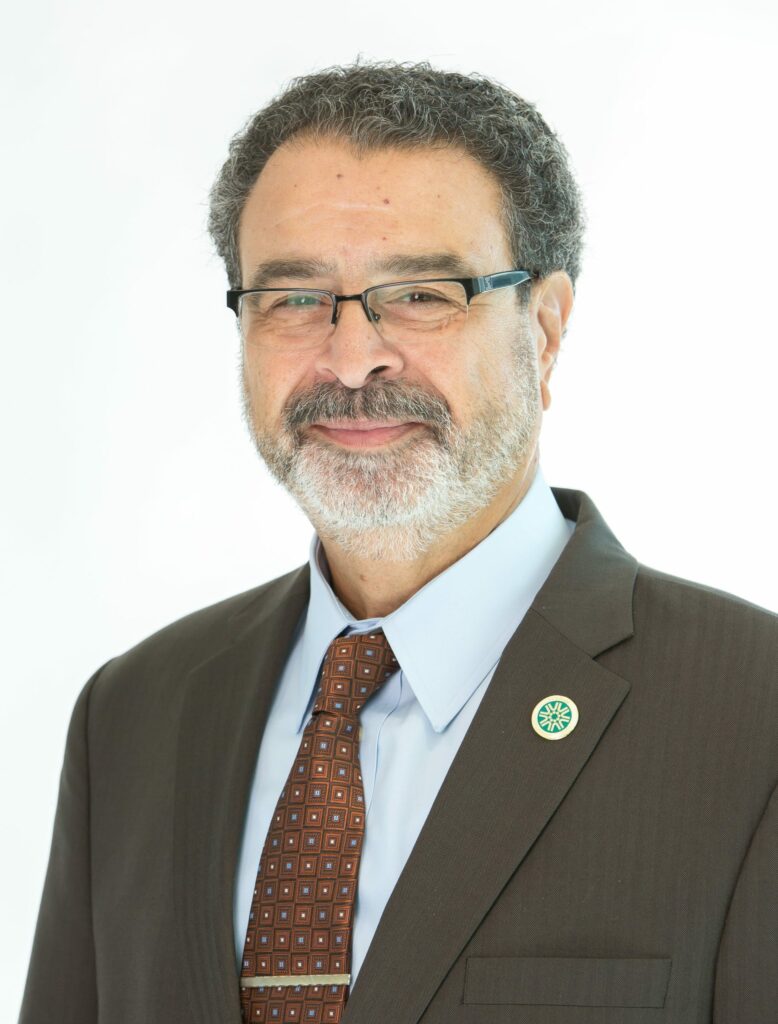 Anthony H. Jackson is currently the Executive Director, Emergency Management, Fire and Safety Systems at Cuyahoga Community College, overseeing all devices for the safety of the College Community and Disaster Training.

Director Jackson has an extensive background in law enforcement (46 years) which began in basic patrol in March 1973 with the Cleveland Police Department (CPD).  Over the years, he was successfully promoted through the ranks to Detective, Patrol Sergeant, and Sergeant in the Internal Affairs Unit, District Lieutenant, and Commander for CPD.

Director Jackson was the Chief of Police for the nationally accredited Cuyahoga Metropolitan Housing Authority Police Department (CMHAPD) from May 1994 until he retired in 2006.  He is a member of various local and national law enforcement organizations and has served as a certified assessor for the internationally recognized Commission on Accreditation for Law Enforcement Agencies (CALEA) Inc. (1999-2006). 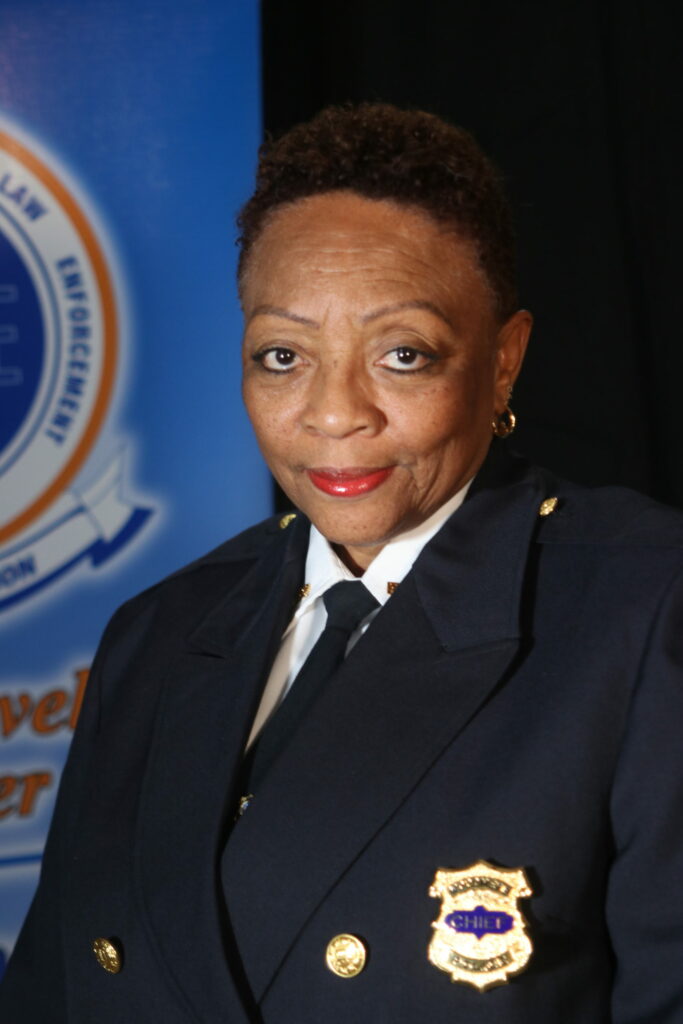 Chief Mason was hired as a dispatcher for Cuyahoga Community College for their police department.  Which began a tenure of service as a Police Officer in 1982 until her retirement from the College in 2009, where she’d been promoted from Police Officer, to positions of leadership as a Sergeant, Captain, and a Commander.  Besides serving the College and greater community as a Law Enforcement Officer in the cities of Woodmere Village, Bedford and East Cleveland Chief Mason was also an entrepreneur as the Owner of RAN Security Services, Inc. and Academy Commander for RAN Training Academy, in which she worked with federal, county, and local businesses and political officials to secure contracts and provide a varied degree of protective services and personnel for visiting dignitaries, valuable property, and celebrities visiting the City of Cleveland.  In between her travels, political, community and charitable activities with her professional memberships and church, she is also a Mixed Martial Arts Judge for events across the State of Ohio. 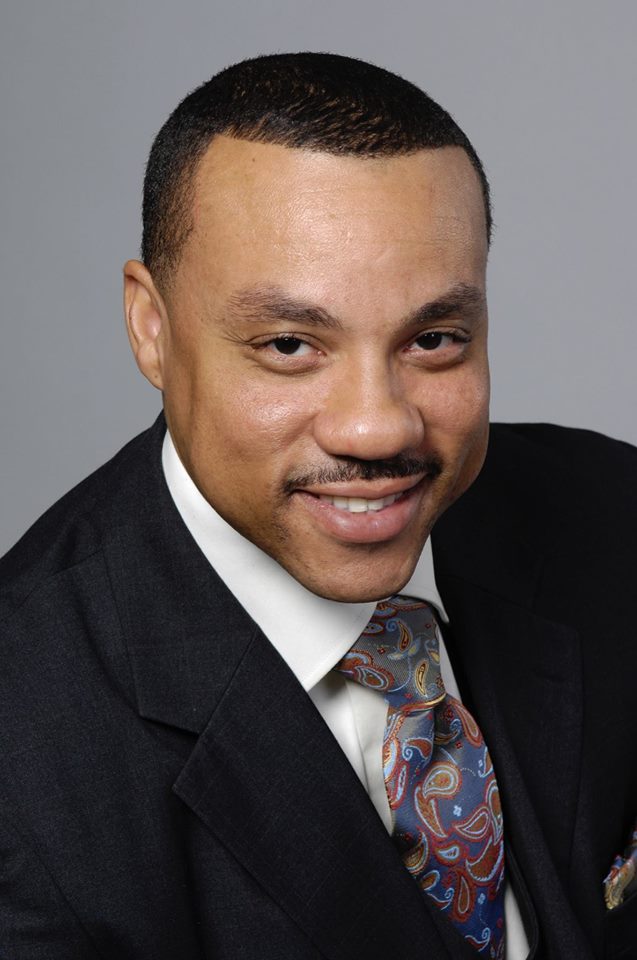 Victor McDowell, Deputy Chief of Police of Cuyahoga Metropolitan Housing Authority Police Department, is an experienced law enforcement executive with more than 20 years of public service. He was appointed to Deputy Chief of Police in 2019. He began his law enforcement career in 1996 with the Cleveland Metropolitan School District Police Department (CMSD). During his six years with CMSD, he was promoted from Officer to Regional Supervisor. In 2002, Deputy Chief McDowell began his 17-year tenure at the Cleveland Metroparks Police Department. He served in various roles, including Detective, Patrol Sergeant, Patrol Lieutenant, Patrol Operations Captain, and Interim Director of Diversity Equity and Inclusion. Deputy Chief  McDowell’s educational accomplishments include completion of the FBI National Academy, Master of Arts Degree in Psychology, and Bachelor of Science Degree in Management from Indiana Wesleyan University. Additionally, he is a Certified Professional through the Society for Human Resource Management. 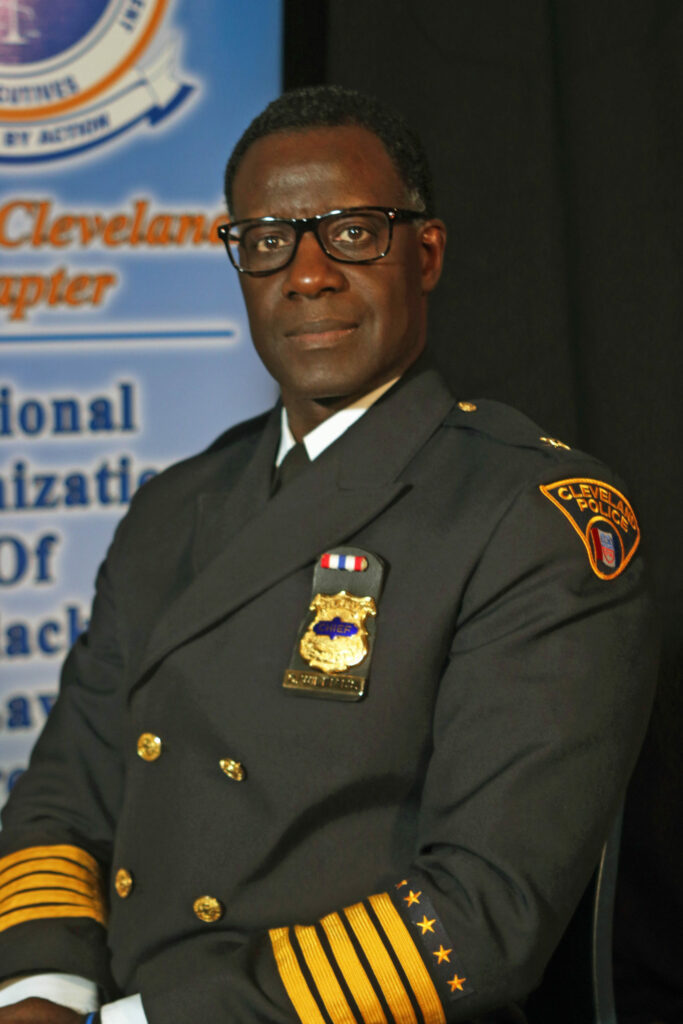 Calvin D. Williams is the City of Cleveland’s 40th Chief of Police.  Chief Williams was appointed to the Cleveland Division of Police on February 24, 1986.  In 1989, he was assigned to the SWAT Unit where he served for nine years. Williams was promoted to Sergeant in July 1997 and became the SWAT Unit Supervisor, a position he held for two years.  Chief Williams has also served as the supervisor of both the Vice Unit in the Fourth District and the Fugitive Unit.  In 2005, Chief Williams became the Cleveland Police Liaison to the US Marshal’s Fugitive Task Force and was promoted to Commander of the Third District in March of 2006.  Then in September of 2011, he was promoted to Deputy Chief of Field Operations where he was responsible for the oversight, management and efficiency of the five Neighborhood Police Districts, the Bureau of Community Policing, the Bureau of Traffic and the Office of Special Events for the Division.  For the past nine years, Chief Williams has coached youth football, leading the Sims Raiders in the Cleveland Muny League. When he has free time, the Chief golfs, a sport he took up about four years ago. 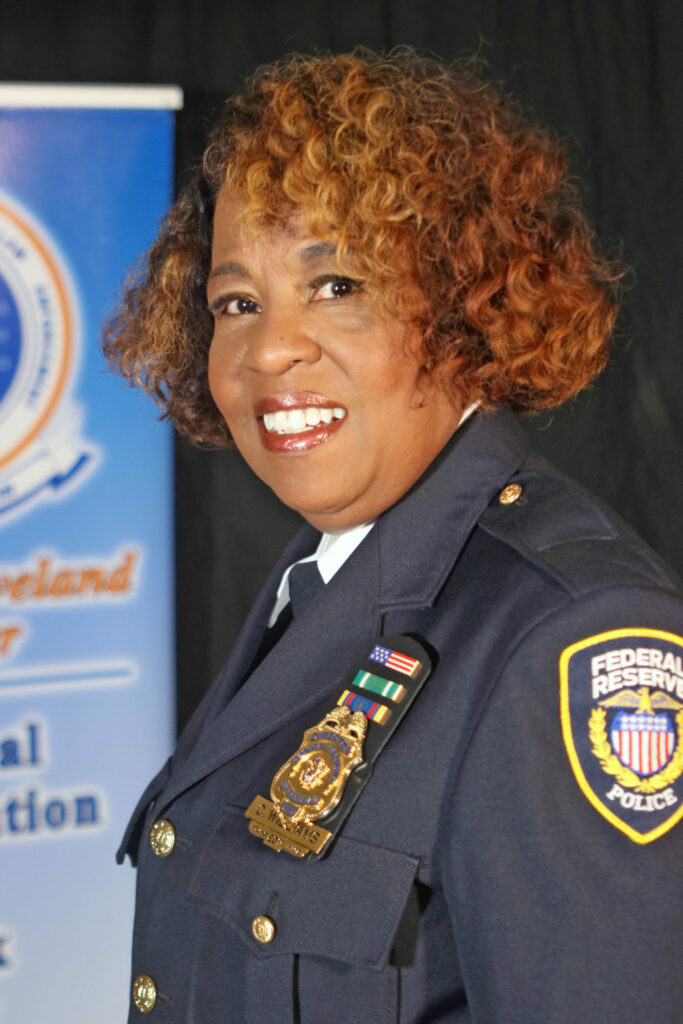 Carolyn Williams currently serves as Vice President, Director of Law Enforcement for the Federal Reserve Bank of Cleveland. She has 31 years of experience as a nationally recognized law enforcement Executive. She began her career in 1990 as a Special Agent Criminal Investigator for the Department of Justice’s Bureau of Alcohol, Tobacco, Firearms, and Explosives (ATF).  Recognized for her excellence as a Special Agent, Carolyn was quickly promoted and ascended into leadership positions responsible for ATF’s response to some of the country’s most challenging events.

During 9/11, Director Williams was the Resident Agent in Charge of the Melville Field Office overseeing the Long Island New York office for ATF.  She oversaw the office during this crisis as well as multiple ongoing investigations.  Director Williams was the Division Operations Officer during the TWA 800 plane crash in Long Island, New York.    From June 2008 to October 2011, Carolyn served as the Assistant Special Agent in Charge of the Newark Field Division where she was second in command for the State of New Jersey working collaboratively across local, state, and federal law enforcement agencies. In her final role at ATF, Carolyn was recognized for her unparalleled ability to recognize and grow talented, diverse law enforcement leaders.

After 21 years serving as a national law enforcement special agent and leader, Carolyn was recruited and hired by the Federal Reserve Bank of Cleveland to redirect a law enforcement group from three offices including Cleveland, Cincinnati, and Pittsburgh.  In July 2021, Carolyn was promoted to the position she holds today:  Vice President, Director of Law Enforcement for the Federal Reserve Bank of Cleveland.

A constant theme of Ms. William’s career has been her understanding of the importance of working across law enforcement cultures.  While this approach often was challenged by boundaries separating law enforcement, Ms. Williams successfully built coalitions in every position she held. 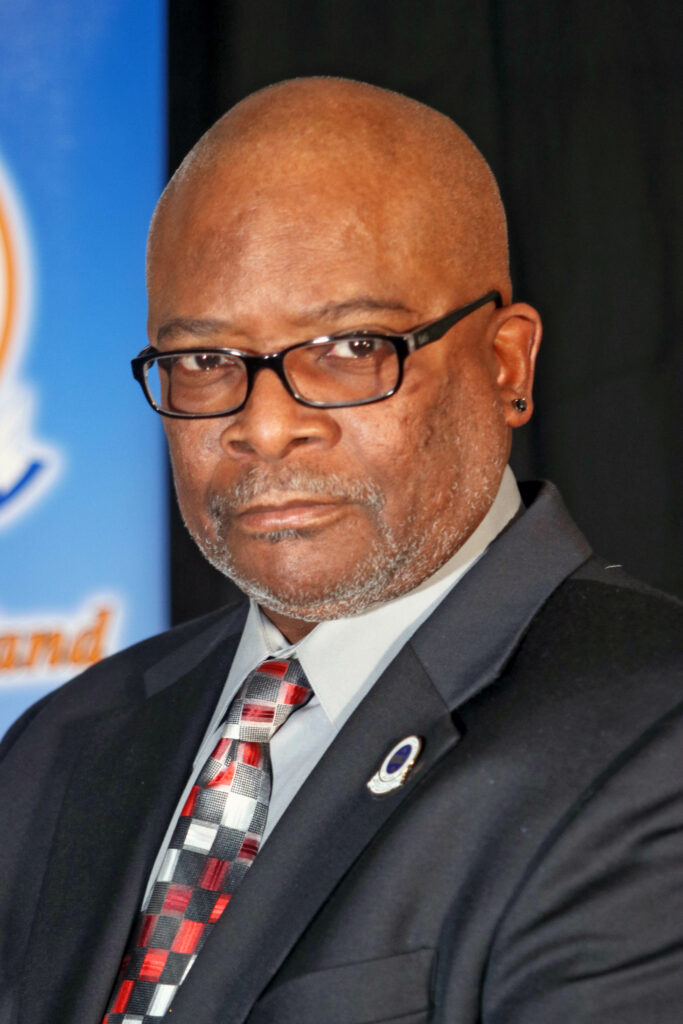 Gregory Winston Sr. is the Director of Security for the East Cleveland City School District, a position he has held since 2008. Mr. Winston has 41+ years of experience, beginning his career in 1981 in the private police sector, along with over 35 of those years in management (1987). Mr. Winston is an Ohio Peace Officer Training Academy Instructor, he has instructed in Basic Police Academies, Private Security Academies, and Corrections Academies. He received his certification to become an Ohio Terrorism Awareness Program Trainer, along with being an A.L.I.C.E. Training Instructor. Mr. Winston also serves as a Commander at Cuyahoga Community College’s Public Safety Training Institute, a center of excellence. His expertise covers a vast array of skills which includes, personal protection for past Presidents, a former Governor and several Channel 19 News personalities, surveillance, proprietary, retail and contract security, just to name a few of specialized areas in the field. Mr. Winston was educated at Case Western Reserve University and Cleveland State University, where his career path was solidified. Mr. Winston has been an officer on the Executive Board of the Greater Cleveland Chapter as the Financial Secretary since the reestablishment of the chapter.